Former President Donald Trump is calling to dissolve the January 6 committee in the wake of Liz Cheney's massive primary loss.

"The people have spoken!" Trump declared.

"I assume that with the very big Liz Cheney loss, far bigger than had ever been anticipated, the January 6th Committee of political Hacks and Thugs will quickly begin the beautiful process of DISSOLUTION?" Trump said in a TruthSocial post following the election. 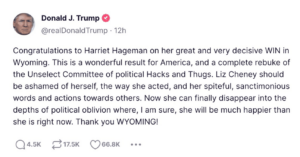 "The great original champion of our party, Abraham Lincoln, was defeated in elections for the Senate and the House before he won the most important election of all," Cheney said. "Lincoln ultimately prevailed. He saved our union and he defined our obligation as Americans for all of history."

Bolton: Trump’s Constitution Post ‘Time Bomb Sitting On The Desk Of Every Republican’