Former President Donald Trump has blasted the FBI for unsealing the search warrant used in its raid on Mar-a-Lago.

"Like all of the other Hoaxes and Scams that they've used to try and silence the voice of a vast majority of the American People, I have TRUTH on my side," Trump said.

"And when you have TRUTH, you will ultimately be victorious!" Trump added. 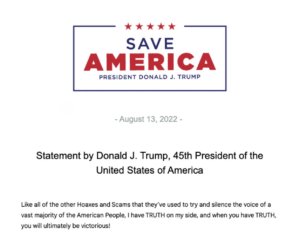 Biden Family Wants Joe To Be President Until He's 86